Emma Chamberlain’s article in Tax Journal 28 Feb 2020 postulates the issue of how to reform IHT.   She believes it needs wholesale reform and in particular tackle issues such as gifts from those with no nexus to the UK. Don’t you think they might be paying tax at home?

However, I have three major issues with the article

First it is not radical enough

Second, we already have a gift tax and

Third, why tax gifts from those with wealth who have no nexus with the UK other than they know someone in the UK that they would like to give gifts too?

Death is the final disposal, when we all go to face the “ultimate Inspector”[1].   Section 62 TCGA confirms this but then gives the deceased and his[2] personal representatives a tax-free uplift in base cost[3]!   Why?  Answer, because we already had estate duty.

Why not apply CGT on death and abolish IHT?   CGT already applies to gifts (but not those made by those not UK resident- how dare they?) without all the seven-year claw back nonsense, GROBs and POAT (pre-owned asset tax which you can elect out of and pay IHT anyway).  When the OTS reported that there were a large number of exemptions and reliefs from IHT, the response of most practitioners (who earn money out of this byzantine system, and why do people have it in for the Eastern Roman Empire which lasted one thousand years longer than the Western Roman Empire?), was not, “how awful, all those reliefs”, but, “and it raises so little so why not save a few thousand trees and abolish it?”

The OTS (Office of Tax Simplification – can’t say anyone has noticed UK tax getting any simpler) in its second report on IHT commented on the interaction with CGT and concluded that the combination of IHT exemptions,  e.g. spouse relief plus the step up in base cost was a clear distortion permitting tax free sales.  Their suggestion is, change the CGT rules!

IHT is based on domicile and when one is asked what does that mean in England? The answer is,

I am told the Belgians say it is where your pipe and slippers are (there are some strange women over there), the Dutch where your girlfriend is (less strange) and in Russia it is where your hunting rifle is (no misogyny there then).   Against these tests, ‘where your heart is’ does sound a little crazy.   Thank goodness for the late Sir Charles Clore for giving us a case[4] which demonstrates the point, and also all those film stars of the 60’s and 70’s who bought burial plots in Switzerland.

The UK has spent a lot of time devising an overly complex, paranoid test of residence (HMRC can’t stand the thought that people could plan with certainty, like in the USA, where as long as you can count and keep a diary, you can work out whether an individual is resident or not).

And whilst we are in radical mood, move the tax year to 1 January to 31 December like the large part of the rest of the planet.  That is a massive simplification for anyone with overseas tax liabilities (OTS?).

CGT is residence based.   We have 101 pages of guidance on the residence test.  CGT is ten years older than capital transfer tax (introduced to replace estate duty), which personally I thought was beautiful in concept but in practice relied on valuations and which lost its intellectual integrity when in 1984 it became inheritance tax.  It has been downhill ever since.

We all know our CGT better than out IHT.  CGT also has rules which deal with offshore trusts (and for all their complexity the pre 2018 rules were manageable but of course HMRC Paranoid (and God bless all who sail in her as no one else will) could not stand the thought of anyone being able to plan their tax affairs with certainty, so rather than receiving gifts, the UK taxpayer now has to beg their offshore trusts for loans on commercial terms, which, of course, is a hinderance to the key driver of the UK economy, consumer spending.

Of course, the best planning for taxes on death is to be a skier, or rather a SKIER, (Spending Kids’ Inheritance, Enjoying Retirement).   Spend it, give it away.    I was once asked why the IHT return is obsessed with jewellery etc.?   Answer, it is of high value,  highly portable and capable of disappearing.

But even if you try to spend it all, there is a chance you will die with some assets.   So apart from removing an entire tax from the UK system, how would CGT on death without a tax-free uplift in base cost look like? 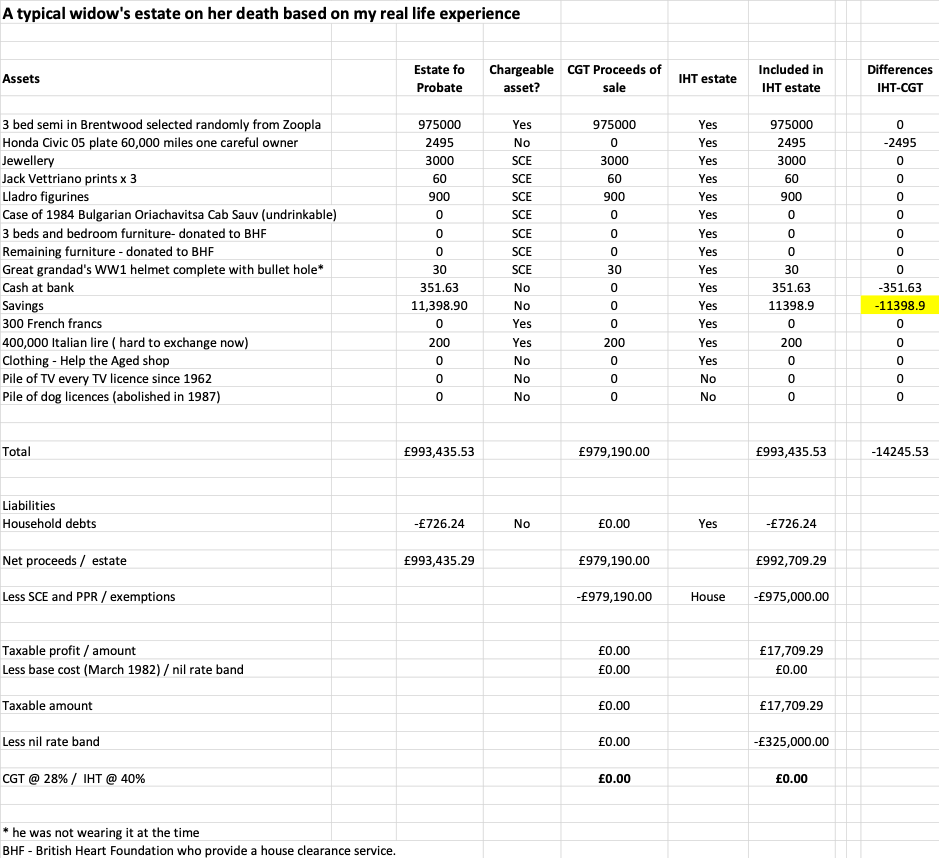 Figure one is “A typical widow’s estate on her death based on my real life experience” (all true).

Figure two is “A widow of a someone who was in the top 1% of earners”.

The first comment is that IHT on Widow 1 is what you would expect.  However, her CGT is Nil because we have applied principal private residence relief, which we think is fair.   Although we also think PPR should be a roll over relief so as to tax down sizers and to stop people using homes as their pension fun.  But that is for another time.

The other major distortion is cash (highlighted).  Of course, it makes no sense to tax cash to CGT as it has no base cost, (but foreign currency does, and Widow 1 has a small amount of it).

Cars are included for IHT, even though they are depreciating assets, which is why they are not included for CGT (why give everyone free capital losses?).

Finally let us consider Widow 3.  She was born abroad, as was her late husband.   She has lived in the UK continuously since before the UK joined the EEC.     She has been living off the income produced by a non-UK trust (T1), in a £6m townhouse in London W2, which is owned by what we call a non-UK resident dry trust (T2) (which has always paid ten year charges).   T1 also has a farm which she rarely visits these days in a UK company which in turn is held by the usual offshore company owned by the trust.   As to the rest, she lived her life  in blissful ignorance of the tax system, undisturbed by advisers or HMRC.   As Del Boy might say, “No income tax, no VAT, no IHT, no CGT, …  Kushti[5]”.

On her death, as she owns practically nothing, apart from clothes and the ever-vanishing jewellery, there is neither IHT, nor, under our proposal, CGT to pay.  But if HMRC put the pieces together, there is a huge s.732 Income Tax Act 2007 charge to be collected plus more if the Trustees of T1 were within self-assessment.

Another consideration is whether you give some or all assets a rebasing when the new regime comes in.

While it is It is up to the politicians as to what element of rebasing they give, I think what would be fairer is just to use straight line apportionment.   But, of course, this also taxes notional “gains” due to inflation (the reason why we used to have indexation allowance).  Inflation is now relatively low, but we are looking at taxes which apply to assets held for a long time,   There was huge inflation in the 1970’s, and at the start of the 1980’s, and more, but not as high, in the early 1990’s and people who bought assets in these decades will have large inflationary gains.

CGT on death with or without PPR, perhaps at 40% rather than 28% and 20%, and leaving cash out of account, together with rules which apply to offshore trusts,  could be an adequate replacement. It also sounds a lot simpler.

[1] From the Tax Adviser’s Prayer written by John Whiting.

[3] See also GAAR example D19.  Anyone whose first reaction to news of their spouse’s terminal illness is, I can get a tax free uplift in base cost on my share portfolio, has some serious issues.

[5] From the Romani “Kushtipen” meaning “good”.