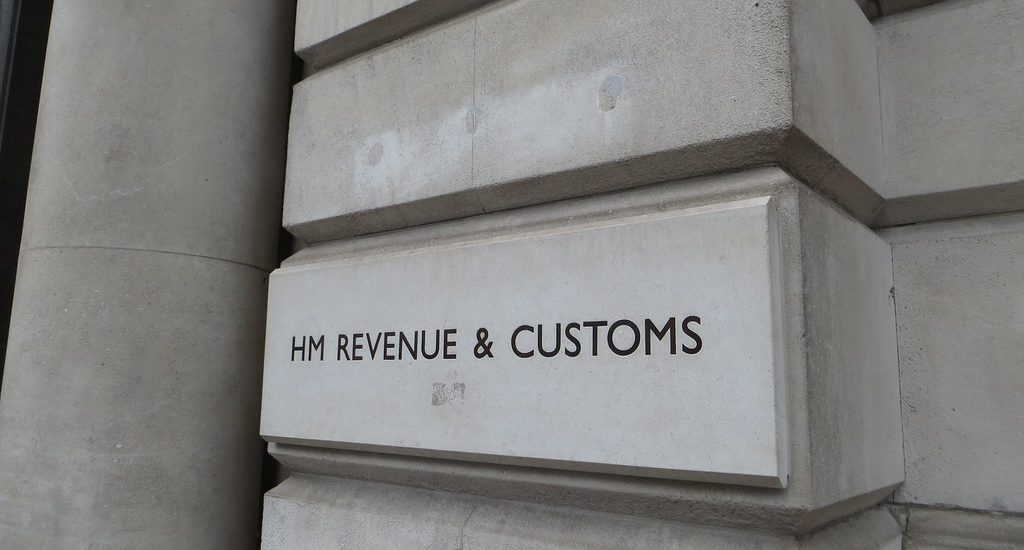 We are aware that many respondents will cover many of the issues arising from the consultation. We only make points in respect of the market in which we work, which is high net worth individuals and their businesses as well as their related trusts onshore or offshore.

We have commented on Reg 3(1) separately and attach our comments in Appendix 1.

There are some elephants in the room and in this respect we ask some questions, highlighted in bold, which we would like to see addressed in any response to this Consultation or in published guidance.

The draft Regulations have adopted wholesale the OECD Rules and definitions.

Our comments focus on three points:

We recognise that HMRC and the UK Government can in reality, only respond and react to the questions as regards the UK; the other matters being a fait accomplit delivered by the USA or OECD (or should I say OCED?).

How did we get here?

Historically each tax authority’s powers stopped at their national border.   This facilitated tax evasion, and to a lesser extent, avoidance.

Countries agreed exchange of information provisions in double tax treaties, but not everyone played the game.  Mainly the USA.

The USA responded to criticism for not exchanging information by introducing FATCA (2011/2) which introduced us to concepts such as Reportable Accounts, FIs, FFIs, Active NFFEs, Passive NFFEs, covered FFIs, W8 (BENE)’s, W9’s etc.   The World recoiled in horror.

Then the UK thought that this was not a bad idea and launched UK ‘FATCA’ on the CDOTs (2013) which followed the Seoul Declaration of the Fiscal Task Force of the FATF led by the UK, and then a programme led by the OECD of TIEAs was rolled out amid calls for AEOI. Meanwhile the EU fiddled on while Rome burned as Luxembourg had banned all fire fighters.   As more information was discovered, (or more precisely, purchased from whistle blowers) it was clear that more needed to be done.

Along with this the USA introduced tax scheme disclosure, followed by the UK (2003/4) which never caught on in the EU.

Then the realisation that some tax advisers were trying to avoid reporting the disclosures, indeed preferring to risk the fines (e.g. KPMG USA – some pretty ripe emails in there), and while the EU were still putting their ATAD together (2020), the OECD and FATF moved on to getting closer to a single global tax system with global tax data sharing, namely a disclosure regime based on Financial Institutions just to check that taxpayers were making proper disclosure at home.

And now, we have the current Consultation on more rules where tax advisers and other intermediaries are being tasked with informing HMRC, thereby potentially dropping their clients in it, on pain of penalties for them, not their clients, if the adviser …

as part of his work for a client advises upon …

(i) makes that CRS avoidance arrangement or opaque offshore structure available for implementation, or

(a) makes the CRS avoidance arrangement or opaque offshore structure available for implementation, or

(b) supplies relevant services in respect of the CRS avoidance arrangement or opaque offshore structure.

Now that is all clear, let us consider our three points.

US funds, assets and bank accounts owned by non-US but UK resident persons

For example, if a Reportable Taxpayer that is tax resident in jurisdiction X transfers a Financial Account to the United States, that transfer would not have the effect of circumventing CRS Legislation, provided the account information is exchanged by the Competent Authority of the United States with jurisdiction X.

Given these factors, will HMRC confirm publicly in their guidance or Manuals, as the OECD appears to have done, that they will regard the USA and its overseas territories as MDR compliant notwithstanding the terms of the Model 1A IGA and the deficiencies in the US Corporate Transparency Act?

In such cases, if a UK based adviser advises the client to use his Swiss TIN rather than a UK TIN, is this reportable?  We would assume not as some reporting is being done under CRS, albeit elsewhere, and the client is entitled to best advice.    If it is reportable, to whom, and why?

Again, in such cases, if a UK based adviser advises the client to use his Swiss TIN rather than a non-UK TIN, is this reportable?   We would assume not as again some reporting is being done under CRS, albeit elsewhere, the client is entitled to best advice and the client is not a UK taxpayer (we do have such clients).    If it is reportable, to whom, and why?

If you have any questions, please contact the writer on the email or telephone number at the top of this letter.

Obligation on intermediary to disclose

3.—(1) Paragraph (2) applies where an intermediary with respect to a CRS avoidance

through a branch or office located in the United Kingdom,

(b) is resident in the United Kingdom,

(d) is incorporated in the United Kingdom.

Accordingly in respect of (b) to (d) this means

arrangement or opaque offshore structure— (b) is resident in the United Kingdom,

(d) is incorporated in the United Kingdom.

Obligation on intermediary to disclose

3.—(1) Paragraph (2) applies where an intermediary with respect to a CRS avoidance

(b) is resident in the United Kingdom,

(d) is incorporated in the United Kingdom or

(e) makes it available through a through a branch or office located in the United Kingdom.

Or do we not care anymore?

USA obligations under Model 1A IGA

(1) the name, address, and [FATCA Partner] TIN of any person that is a

(3) the name and identifying number of the Reporting U.S. Financial

(4) the gross amount of interest paid on a Depository Account;

(5) the gross amount of U.S. source dividends paid or credited to the

(6) the gross amount of other U.S. source income paid or credited to the

account, to the extent subject to reporting under chapter 3 of subtitle A

or chapter 61 of subtitle F of the U.S. Internal Revenue Code. 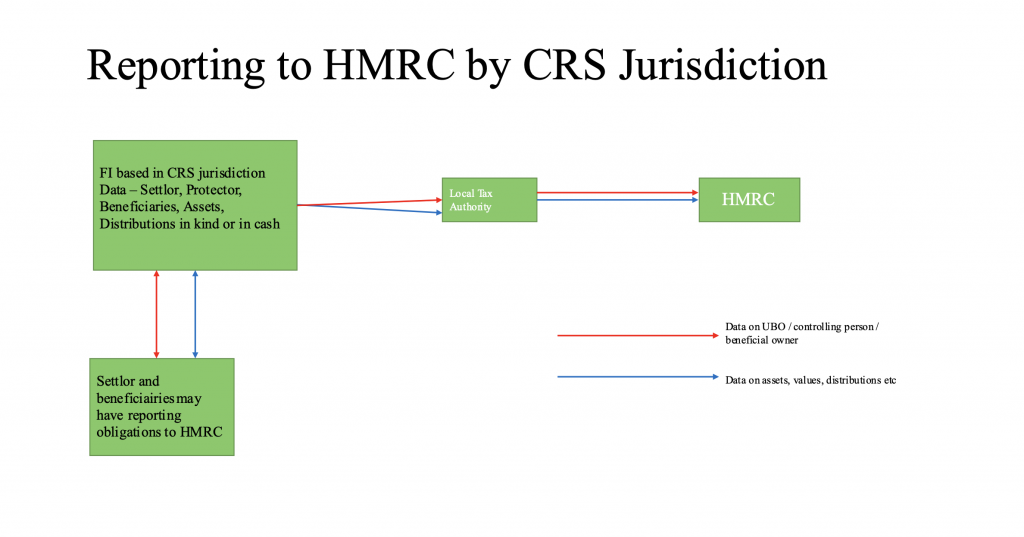 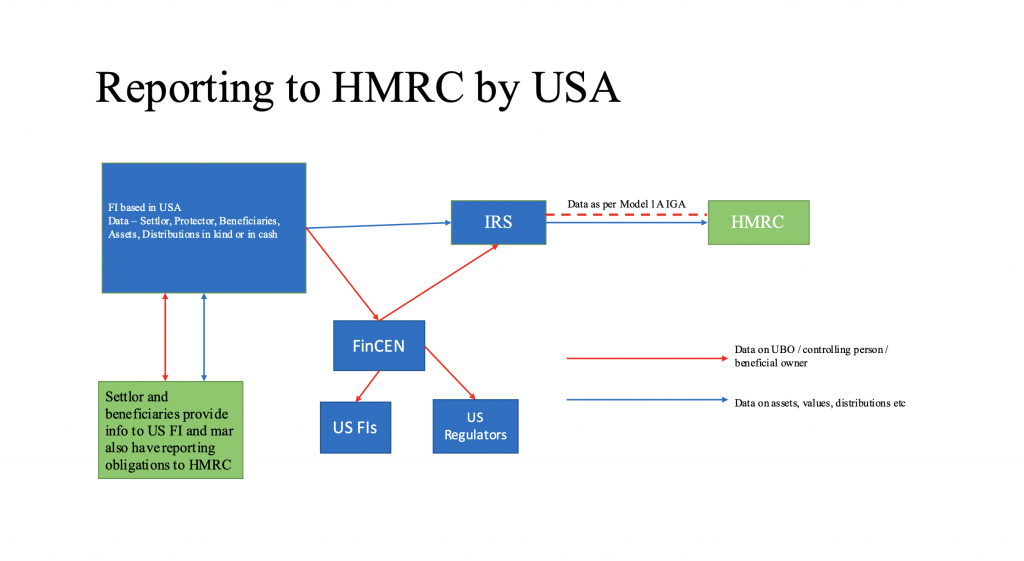 References
[1] MDR.  This area is full of acronyms.  If you do not know what most of them are, you probably will not obtain much value form reading this.  However, if you are reading this for educational purposes, a list if acronyms is attached at Appendix 3.

[3] See historic Tax information exchange agreements; Climate Change Protocols and Treaties, and no doubt many others.

[5] See for example R v Michael Allcock (1997), who is the most senior revenue person to date to be convicted of accepting bribes and was sentenced to five years imprisonment.   HMRC used to publish annually the number of staff who had accessed taxpayer files which they were not supposed to (one presumes celebrities and the like out of interest).   This has not been done for a number of years.  Why not?

[6] I once had HMRC accuse a client of launching a multi $100m bond issue in bearer form to avoid stamp duty reserve tax.  Not true, it wanted to raise multi $100m for its business.   Its putative investors wanted the bearer facility.  See the recent case of Euromoney [2021] TC08046, which above everything else, is an excellent display of common sense.

[7] Litivenko and the Skripals are not conspiracy theories.  HM Government are clear that these were deliberate acts of the Russian Federation and its cathedral loving agents (so good they saw it twice).  Although we doubt that the perpetrators are highly unlikely to have the information which they require without troubling HMRC.

[8] I have been in the international tax sphere long enough to witness tax authorities bow to political pressure from other governments and more, e.g. an EU tax authority ‘phoned up and asked the local adviser to supply all papers relating to X on behalf of a national newspaper, which the local adviser would have done had I not said ‘No’.  Example 2 : Another EU tax authority sent written questions about the resident company’s shareholders which had nothing to do with their local tax system and had clearly been written on instructions from a non-EU government.  And as for HM Government breaches of taxpayer confidentiality, let’s start with Vodaphone on the front page of the FT labelled as tax avoiders.  The subsequent HM Treasury enquiry stated that the breach did not come from them.