HomeBlogTaxBrexit – statements of the obvious for businesses

Brexit – statements of the obvious for businesses

For the last 4,000 years[1], Britain has been trading with others from overseas.  Amber from the Baltic, figs and wine from France in return for metals, stone etc.   Things have changed a lot in the last 4,000 years, and all we see now is that the rate of change is always increasing.   A No Deal Brexit, which is what the then Prime Minister David “call me Dave” Cameron said leavers would be voting for[2], is highly likely, and will represent a sudden change for those who do trade internationally.

According to the EU, only 5% of SMEs operate in more than one EU member state and only 25% sell to another member state[3].  So, we are largely looking at businesses with over 250 employees, of which there are of course, a lot[4].

A general rule is that if you want to sell abroad, then you are going to be more successful if you

A business plan based on having English only speakers selling pints of warm beer to local people in France or Italy is therefore unlikely to succeed.  One thing the EU has done, by and large, is to stop member states from adopting anti-competitive practices.  I have two favourites examples, the Belgian margarine war and the Battle of Poitiers (1983, not 732).

In the early 80s, people were apparently being confused between what was margarine and what was butter.   In Belgium, the government’s concern was the flood of cheap French and German (boo hiss) margarine being sold in Belgium and displacing the local produce.   Walter Rau Lebensmittelwerke (Rau) (German company) sold margarine in the shape of a truncated cone, which looks like this:

However, the wily Walloons and the phlegmatic Flemish changed their law to say that margarine could only be sold in Belgium if they were in the form of cube-shaped blocks having a net weight of 250 g, 500 g, 1 kg or 2 kg and in sealed containers, which look like this:

This led to a dispute with their Belgian customer.  To cut a long story short[5], and despite the Belgian government’s claims of public health requirements, and that the measure prevented confusion with butter which was packaged in a round tub, that the measure was justified, the court in a case which was between the German supplier (Rau) and its Belgian customer, found that the Belgian law breached EU rules[6].

Having been forced to permit the importation of Japanese VCRs[7], France decide that it should have a specific and detailed import regime.  So, although the VCRs arrived at ports in Northern France, to go through Customs, they had to be cleared at a special customs office in Poitiers.

Here is a map showing the obvious convenience of Poitiers for this purpose: 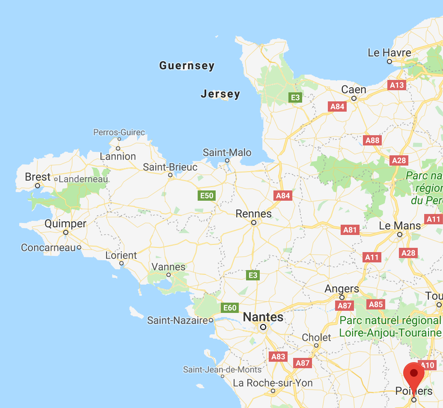 As explained by the New York Times[8], this prevented very many Japanese VCRs[9] from arriving in France.  However, 3 months later, the French were forced by the EC Commission as it then was into announcing a change[10].

And this is largely what the Single Market is all about, literally creating a single market where goods are safe, and compete on as level a playing field as possible.

Post Brexit, British manufacturers will still need to keep up to date with EU regulations, e.g. origin of goods, avoiding counterfeit goods etc if they want to sell into the EU.

As for the UK, well we are happy with the safety and quality of EU goods now, so why would be not satisfied in the future, especially if we believe that the EU will only impose more rules on their own products?   The UK could say, fine you are welcome, subject to the WTO tariffs, which are much lower on food items than the EU ones, welcome and we will see a new banana battle, EU bananas versus Chiquita bananas (the world’s largest banana company, unheard of in Europe – look out for their logo post Brexit) – see below.

That can only be good all round.

EU imports landing in the UK or RoI post Brexit

The idea here is that the UK and Irish ports can clear goods for EU import and those goods then travel, untampered with, to the EU.  One would hope that all large international concerns with a UK presence are using the AEO[11] regime, which not only provides for physical security throughout the supply chain, but also simplifies the customs and VAT processes.

But for those multinationals not using AEO then I would suggest you sort it out, and if not, then I suspect you will soon be landing more goods in Rotterdam.

AEO is meant for large businesses.    SMEs will have to get used to using the procedures and processes we use for exports and imports to and from non-EU countries to the EU ones as well.

We will lose tariffs agreed by the EU with other countries and initially will apply those set by the WTO.  What we also lose are the restrictions on how much a foreign supplier can sell into the UK.   At present it seems everything we import is made in China, but the EU has restrictions on how many of a product can be sold into the EU.  Who can forget Obi Wan Mandelson fighting in BRA WARS for the EU against China?[12]

Going forward the UK will need to start making its own decisions (shock).   So what we lose in EU bureaucracy we gain in UK bureaucracy, but at least they are our bureaucrats.

[2] Many times for example at a speech to the Royal Institute of international Affairs at Chatham House on 13 November 2015 https://www.youtube.com/watch?v=gUsKWsPcRXE

[4] As for the people impact, the current number of people in work is around 32.14m in the UK.  5.1m in the public sector, 27.04 in the private sector and per the Federation of Small Businesses (FSB, not to be confused with the successor to the KGB, Russian security service (ФСБ), 16.3m in the SME sector https://www.fsb.org.uk/media-centre/small-business-statistics , which leaves 10.74m in the large private sector economy.    Whenever anyone asked me how many people worked at my firm, I used to say about half.

[6] And referred back to the “Cassis de Dijon” Judgment of the Court of 20 February 1979.
Rewe-Zentral AG v Bundesmonopolverwaltung für Branntwein.  Reference for a preliminary ruling: Hessisches Finanzgericht – Germany.  Case 120/78

[7] Video cassette recorders, machines which played and recorded onto video tape, an electromagnetic tape which stored data, principally sound and pictures.  Largely replaced by DVDs which in turn have been replaced by downloads and streaming.

[9] Which were clearly far superior than French ones, we all know of Sony, JVC etc., but can you name a single French video brand?

[11] Authorised Economic Operator – a regime established not by the EU but by the World Customs Organisation http://www.wcoomd.org/ and which will continue, like most of everything else, after Brexit.